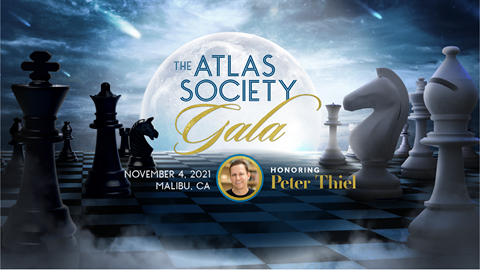 We're proud to announce that Peter Thiel will be accepting The Atlas Society's Lifetime Achievement Award on November 4th, in Malibu California. Further details to come, though you'll want to save the date for this most momentous event of the year.

Peter Thiel is an entrepreneur and investor. He co-founded PayPal, led as CEO, and took the company public; he made the first outside investment in Facebook, where he still serves as a director; and he co-founded Palantir Technologies, where he current serves as chairman. He has provided early funding for LinkedIn, Yelp, and dozens of startups, many run by former colleagues who have been dubbed the “PayPal Mafia.” He is a partner at Founders Fund, a Silicon Valley venture capital firm that has funded companies including SpaceX and Airbnb. He started the Thiel Fellowship, which funds young entrepreneurs, and he leads the Thiel Foundation, which works to advance technological progress and long-term thinking. He is also the #1 New York Times bestselling author of Zero to One: Notes on Startups, or How to Build the Future.

Thiel studied philosophy at Stanford University, and on the national and international stage continues to bring a philosophical perspective to bear on the cultural and political challenges of our times. Join us in celebrating a pillar of business and achievement in SoCal this year!

If you attended our gala last October, then you can appreciate the feat of an event we accomplished amidst lockdowns and uncertainty. And you can rest assured that our 2021 gala will be even MORE spectacular.

We’re honored by Mr. Thiel’s early commitment to be a part of this year’s event.  Please match his early commitment with one of your own -- reserving your seats at the gala right now.  Join The Atlas Society’s sponsors, supporters, trustees, scholars, and staff to celebrate achievement, individualism, reason, and freedom with others of like minds. The gala is our primary fundraising event of the year and offers our donors a chance to support our work while also receiving the benefits of connecting with one another in person.